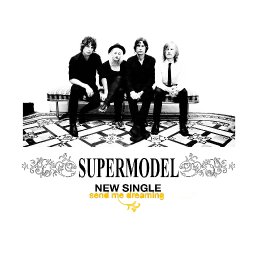 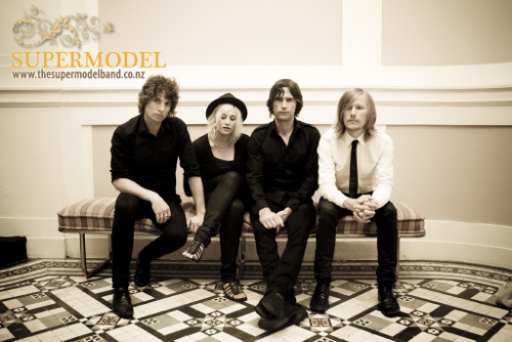 About Us Supermodel
Formed in 2006 and collectively lead by the clear-voiced, half-showtune/half-crooner informed vocal delivery of their charismatic lead singer/songwriter Mark Hanify, Supermodel is the most invigorating new melodic rock act to emerge out of Wellington, New Zealand in recent times. Structured around comparable musical traditions to those existed within by the likes of Queen, Muse and The Strokes, Supermodel is a four-piece band made up of Mark on lead vocals/guitar, his sister Rose on keyboards, Michael White on bass and Tony Kemp on drums. All top-tier singers, Rose, Michael and Tony provide lush backing vocals, fleshing out Mark’s melody and harmony centralised song-writing into powerfully vibrant stadium size arrangements. Lyrically dealing with the key themes of love and adversity, Supermodel make songs for soul searching. Emotive and moving, their music serves as a comforting reminder that more often then not, things will be alright. All lifelong musicians, since inception, Supermodel have played support across the country to the crème de la crème of commercial acts in New Zealand, performing everywhere, from humble pubs in Wanganui to The cavernous TSB Arena in Wellington. Having opened for the likes of Midnight Youth, Gin Wigmore, The Feelers, Jonny Love, Frankie Stevens and Dane Rumble, Supermodel have entertained crowds of up to 15,000 at outdoor events such as The Jackson Street Fiesta, The Island Bay Festival and Toast Martinborough. Recently featured on TV1’s Good Morning Show, Supermodel is currently drafting material for their forthcoming debut album. Building around well-received singles such as ‘The Walk of Shame’ and their current release ‘Send Me Dreaming’ (and it’s excellent Ivan Slavov directed/produced video clip), this June, following a national tour in May, Supermodel will venture to the UK to record with respected Welsh producer Greg Haver (Opshop, Manic Street Preachers) and make a few keynote showcase performances. Having received extensive radio/TV support from the New Zealand B.Net, Kiwi FM and Juice TV, and with the unreserved backing of Opshop’s Jason Kerrison behind them, Supermodel are moving on a swift trajectory upwards. Most importantly though, they make songs they completely love; and given half a chance, so will you.
Influences:
Muse, Queen,